by DonKB-PSX
Anyone with a fairly recent NVIDIA discreet card may want to hold-off installing the latest driver for the time being.


Nvidia released its latest GeForce Game Ready Driver to the public just a few hours ago, it is version 397.31 WHQL. The driver release came along with the usual release notes, blog post, and encouragement to download and be ‘game ready’ for a couple of new PC titles. In this case it was BattleTech, and Frostpunk. However, since release there has been a steady stream of problems reported on the official Nvidia GeForce support forum. These are quite serious problems, so you might want to pause any GeForce software update plans for now…

Checking through the forum, it seems to be that users packing an Nvidia GeForce GTX 1060 are affected by the issues. The issue looks pretty serious and bothersome, as affected users will be faced with a restart to reinstall driver screen, and when the reinstall completes they will meet up with this same screen again, and again. Consider that the GTX 1060 is Nvidia’s most popular graphics card, according to the current Steam Hardware Survey data, and these issues could cause a lot of frustration.

The situation is ongoing with Nvidia support on the forums asking users for more specifics about their complaints, especially with regard to graphics card model IDs.

Meanwhile there appears to be a simple working method to roll back to v391.35. Affected users need to download this older driver and the Display Driver Uninstaller software. The next step is to reboot in safe mode and

Hopefully Nvidia will sort out this issue shortly, pause auto-downloading and updating via the GeForce Experience, and release a new Game Ready driver for those wishing to get the best performance in BattleTech and Frostpunk on their GeForce powered PCs.

by jsnepo
Thanks for the heads up. I was about the download the driver update. Good thing I have PPS open in my browser.


When attempting to upgrade to Window 10 April 2018 Update select devices with certain Intel SSDs may enter a UEFI screen reboot or crash repeatedly.

Microsoft is currently blocking some Intel SSDs from installing the April 2018 Update due to a known incompatibility that may cause performance and stability issues. There is no workaround for this issue. If you have encountered this issue, you can roll back to Windows 10, version 1709 and wait for the resolution before attempting to install the April 2018 Update again.

Microsoft is currently working on a solution that will be provided in a near future Windows Update, after which these devices will be able to install the April 2018 Update.

Microsoft learned that devices with certain Intel SSDs repeatedly crashed during the installation of the update reports myce; other devices continuously restarted and got into a boot loop after which the systems became unusable. Therefore, the software giant decided to stop distributing the updates to affected systems. Microsoft does not list which exact Intel SSDs suffer from the issues. Currently, there is no patch or workaround available for the issue, it’s expected that after Microsoft has found the root of the problem, it will release an update and make the Windows 10 April 2018 Update available to owners of the affected systems again.

MS mentioned 'certain' Intel SSDs, but does not name them specifically by model. Windows 10 users with an Intel SSD, who already installed the Windows 10 April 2018 Update, are advised to return to an earlier version of their operating system. This can be done by pressing F8 during boot-time. For now, owners of those systems won’t get the update automatically and can’t start the update manually. 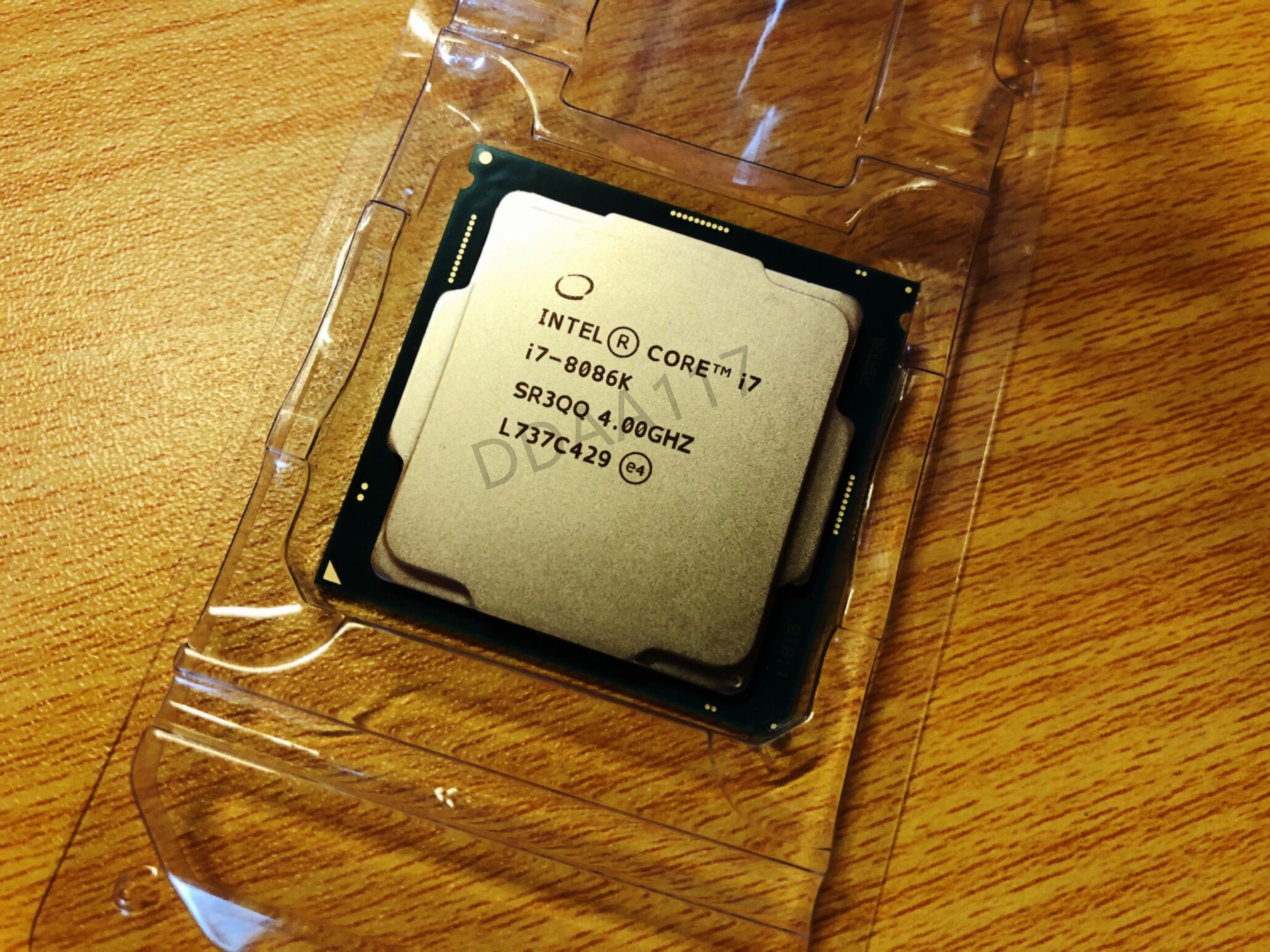 It looks like the Intel Core i7-8086K processor has finally been confirmed by Overclockers.co.uk’s Gibbo. The CPU which has been rumored for a while now is said to be announced at Computex and will be up for pre-order, starting 8th of June.


A very interesting SiSoft Sandra entry (via TUM APISAK) confirms something that had long been suspected over the past few weeks – Intel is going to be ditching Hyper-Threading for its i7 parts in the upcoming Coffee Lake processors. This is now going to be a feature limited to the i9 branding, led by the flagship Core i9-9900K whose existence I exclusively revealed almost a month ago.

Intel’s Core i7-9700K spotted in SiSoft Sandra database – will not support Hyper-Threading
There is something very interesting happening with Intel’s branding strategy and I will get into that in a bit, but first let’s take a look at the leak. SiSoft Sandra is one of the more reliable benchmark databases out there since engineers usually use it for testing and almost always forget to uncheck that pesky upload-to-them-interwebs option. This allows us to get a reliable and early sneak peak on engineering samples and such beforehand.

The Core i7-9700K will have 8 cores and 8 threads (this also automatically means that the i5 variant will have 6 cores and threads) which means that Hyper-Threading is not supported on this part. The chipset in question will be the Z390 chipset, which is something we have covered a while back as well. The Core i7-9700K scores a cool 157.24 GOPs in the benchmark but please keep in mind that this is most likely a non-final sample and the performance could improve significantly.

The most important takeaway from this leak is not the score but rather the shift in branding strategy – so let’s talk about that for a bit. Intel is currently executing a strategy that would shift their customer base towards the higher end. Depending on how they price this, they have essentially introduced an additional tier in the mainstream segment to further tap the market.

The Core i5 and i7 will represent the stepping stones towards the full-fledged Core i9-9900K. Also, keep in mind that there are design based reasons for this decision as well. Most applications can usually handle a maximum of 8 threads efficiently, any more than that is diminishing returns anyways. So for most use cases, the Core i7-9700K should perform similarly to its Hyper-Threaded counterpart clock for clock.

For rendering and multi-threading optimized applications, however, the Core i9-9900K will take a clear lead over the i7-9700K at the same clocks. Once again, it is too early to decide whether this is a good decision or not – it will depend entirely on how Intel prices it. If the company plays its cards right, this would be a very powerful tool to expand the market depth and tap more customer bases without sacrificing any significant amount of performance (remember, most applications right now aren’t designed to take advantage of more than 8 threads).

On a side note: We still have not heard anything about an i3 variant, which should be a quad-core part. Yield theory makes it one of the most lucrative parts to sell and I find it hard to believe that Intel would give that up. The most likely scenario is that we will see a staggered launch sometime soon after (unless the company’s yield for 14nm++ has increased to such an extent that they can comfortably sell 6-core parts like they would quad cores).


I never got the chance to use one of these things since we pretty much moved from floppy to CD "room" drives. LOLZ...


By using inferior chemical raw materials, thousands of wafers in a semiconductor factory have become unusable by the world's largest contract manufacturer TSMC. This could also affect chip manufacturing for customers such as Huawei and Nvidia.

TSMC has confirmed the use of "out of spec" chemicals and stated in a statement that this will affect production yield. The Chinese news website ETtoday mentioned (it's a google translation though) that more than ten thousand wafers are affected and production came to a halt. The Fab 14 in the south of Taiwan produces 12-inch wafers (300 mm). The classification as "Gigafab" means that more than 100,000 wafers are produced per month. According to other reports, it is feared that chip production could be impacted by major customers such as Nvidia (graphics chips), Huawei and MediaTek (smartphone SoCs), which manufacture their products at 12 nm and 16 nm at TSMC.

How Motherboards Are Made (2019) | Taiwan Automated Factory Tour, ft. Gigabyte 
EDIT: Added the video below. The video suggests how to properly budget on every PC part.

Are Budget builds ACTUALLY worth it?

by DonKB-PSX
AMD vs Nvidia - Which is the BEST GPU for Modern Emulation?

by DonKB-PSX
For those with AMD Ryzen builds. Memory tuning can benefit some games, as shown in the second video.

How to Manually Tune Your DDR4 Memory For Ryzen